MILACA, Minn. – It brings to a close a long journey. One side’s been filled with passion, pride and excitement. The other side has been filled with crickets, tumbleweeds and can’t-be-bothereds. Heggies Pizza has made it clear from the start that it’s still on with Papa John’s after the latter put down frozen pizza by Tweeting “frozen pizza = the pizza equivalent of a participation trophy.”

Heggies kicked things off with (what could barely be considered) a press conference in late December announcing its intention for a taste-off and a deadline for a response from Papa John’s. That was met with the sound of silence. Not to be deterred, Heggies offered a one-day endorsement contract to Cooper Manning, which he promptly and politely declined. So, now it’s time to settle the score at our Big Game – The Great Pizza Snowdown (unlike other large competitions in town next week, our event name is not trademarked…we really don’t have the time nor the resources for that).

To settle this once and for all, Heggies is holding The Great Pizza Snowdown taste-off competition at the James Ballentine Uptown Minneapolis VFW Post #246 (2916 Lyndale Ave S.) on Tuesday, Jan. 30, at 6 p.m. The event is free to the public and complimentary pizza (HEGGIES PIZZA!) and Minnesota craft beer will be served. There will also be special post-event karaoke by Har Mar Superstar.

Har Mar Superstar, a national singer and entertainer based in Minneapolis, will also be a judge at the contest alongside Sweet Martha Rossini Olson and Wyoming Police Chief Paul Hoppe. Sweet Martha is the Minnesota icon behind the unbelievably popular, and quite tasty, Sweet Martha’s Cookie Jar booths at the Minnesota State Fair. Chief Hoppe is a servant of public safety and a prolific Tweeter with national reach. Each judge will be blinded-folded for the taste-off and will describe then discuss the different pizzas.

Each judge will have Buhl Water from Minnesota’s Iron Range. Buhl’s town motto is “The Finest Water in America,” so it’s the perfect palette cleanser for the judges’ tremendous taste buds at the Snowdown. If Sweet Martha insists on milk, Heggies will make that adjustment.

Heggies and fans of Heggies have been showing their hometown pizza pride and staking their turf around the Twin Cities in anticipation of Big Pizza’s arrival to show off their large-dollar relationship with the National Football League. The “I’m With Heggies” campaign yard signs have been popping up, “I’m With Heggies” bumper stickers are trickling onto the streets, and a limited number of “I’m With Heggies” tee shirts have made their way into circulation.

The campaign even traveled to Louisville recently as part of a trip to the Papa John’s HQ to personally invite them to the competition and to drop off Heggies pizzas. The Heggies team also found time to learn more about their opponent and spread a little “I’m With Heggies” spirit around town to notable locations. The Heggies team even ventured to Mick’s Lounge in Jeffersonville, Ind., where Papa John’s got its start to further immerse in preparation as it girds its loins for the Snowdown battle.

A Good Night, for Good Times, and To Support Good

Not just a pizza company (HEGGIES) nor the audience who will be enjoying delicious food, delicious beer and water, and a delicious karaoke performance, will be benefiting from the goodness of the night.

Heggies will be making donations in the names of each judge to their charity of choice – a positive way forward in what’s been an interesting yet not-very contentious past several weeks on this pizza platform. 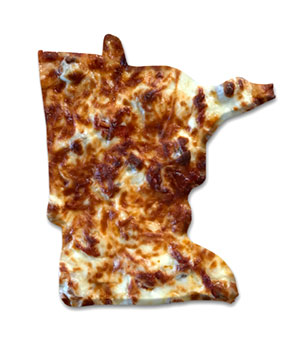 MILACA, Minn. – Heggies Pizza wants to be clear: It’s still on with Papa John’s. This despite their recent snub of the Heggies Great Pizza Snowdown taste-off challenge that was triggered by Papa John’s Tweeting that “frozen pizza = the pizza equivalent of a participation trophy.”

Via a (nearly amateur) press conference last month at Manning’s (ahem!) Cafe in Minneapolis, Heggies called on “Papa John’s to step into the circle in front of a global audience to determine which pizza is a slice above the other.”

Heggies excitedly waited for a response, giving Papa John’s a midnight deadline on New Year’s Eve to respond. Heggies fans eagerly demanded action, media reported on the challenge with fervor and flavor and social media channels were all an inferno aflutter.

Then, eerily there was a long wait followed by deep disappointment. Nothing. Not even a courtesy “no thank you” nor a “leave us alone, we’ve got bigger dough to toss.”

Heggies acknowledges and appreciates that Papa John’s has plenty going on these days, especially with Papa John’s founder John Schnatter stepping down the day after the Snowdown challenge call-out (curious). But still.

Heggies has heard through the oven door that the billion dollar (that’s billion with a b) international pizza chain has major market takeover plans when it brings its notable entourage of TV-jingle-singing celebrity athletes and rapping professional football sports owners to Minnesota in several weeks for the Big Game. Even without its big pepperoni, this is what you do when you buy official status for the pigskin league we don’t think can legally be referenced in this press release.

This is fueling Heggies’ plan to defend its home turf in the coming weeks. The effort will include social media and grassroots rallies, culminating with a fitting signature event that showcases authentic Minnesota.

“Heggies is proud that the world will focus on our home state but is committed to making sure the real Minnesota doesn’t get lost in the noise of big pizza blowing their marketing budgets,” said Heggies owner Shawn Dockter. “Minnesotans love sharing simple pleasures and good times with great friends, which is done best over a Heggies pizza.”

Sing It: Heggies Wants You On Our Side!

While Heggies is the everyman’s pizza, the company thought it was smart to stretch itself by landing a celebrity endorser coming to town for the Big Game. It has offered national media personality (annnnnnd other stuff) Cooper Manning a one-day endorsement contract paid in delicious Heggies frozen pizzas, lunch at Manning’s Café and $18 in pull tabs (Editor’s Note for readers outside Minnesota: they’re lottery tickets typically bought in bars).

Indeed, shortly after Heggies extended the endorsement offer, Cooper Manning "respectfully declined" the opportunity. We get it. Onward.

In the meantime, Heggies isn’t backing away from its initial Snowdown challenge. They just aren’t holding their breath.

“Papa John’s may be lost these days without its Papa, but we are easy to find if they want to settle things around the pizza,” said Dockter. “Just head north from Minneapolis on Hwy. 169 and watch for our ‘world headquarters’ on the left just before the big lake. They should ask for us by name, even if unsure about the pronunciation.”

Dockter and his Heggies crew hopes Papa John’s steps to the plate but notes it’s on no matter what.

“We hope Papa John or new Papa John will show up for our Snowdown event, we’d love to have them and will treat them with respect they should expect from the Bold North,” Dockter said. “We’ve been inspired by the excitement from our fans and it’s given us a little more swagger. That said, if they don't show up we still know how to get their pizza so the show will go on. 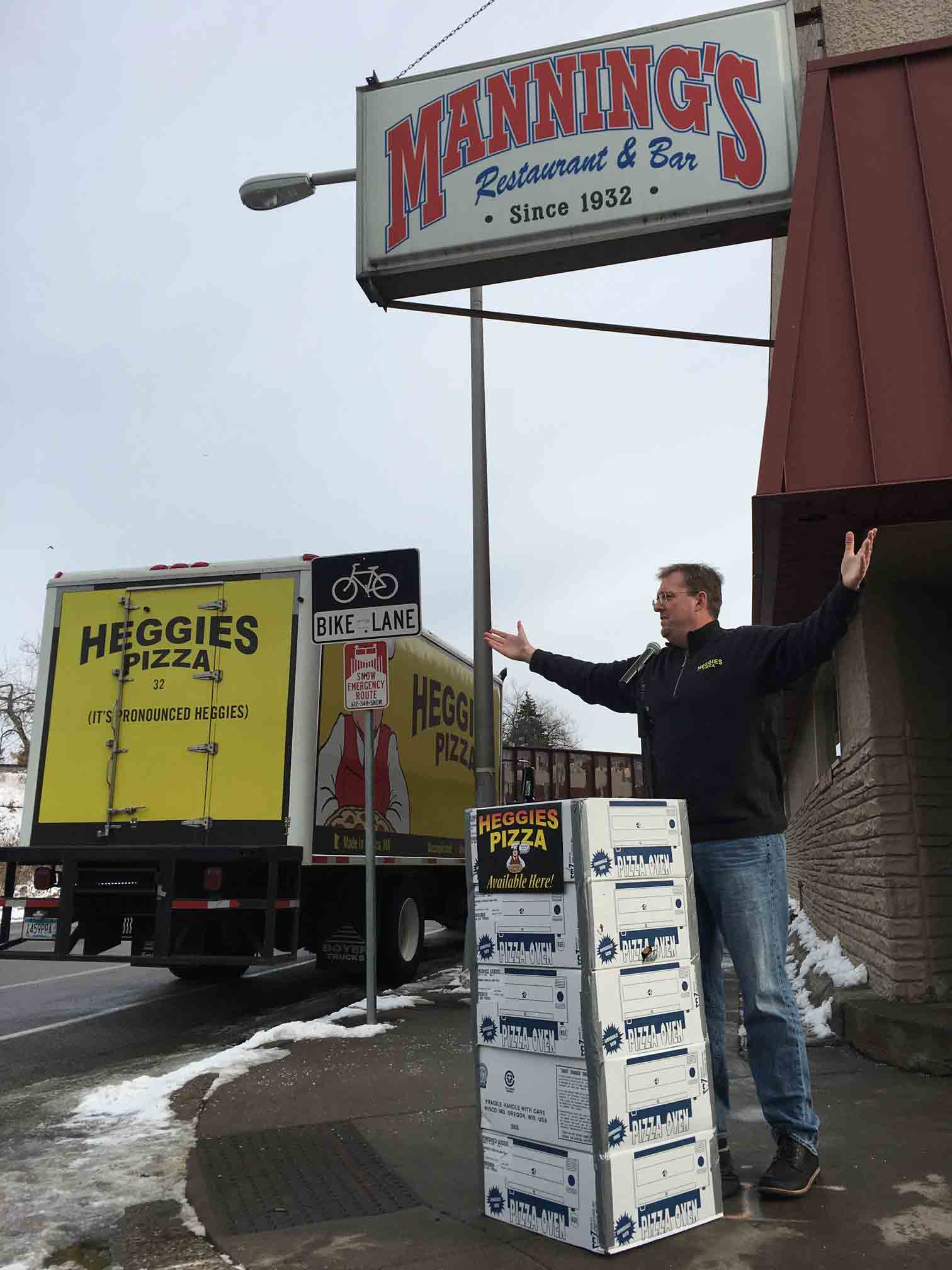 MILACA, Minn. – December 19, 2017 – It’s on, pizza people. Heggies Pizza, a humble yet unapologetically amazing pizza company out of Minnesota’s North Country (the tiny town of Milaca, just off of Lake Mille Lacs) calls for international chain Papa John’s to step into the circle in front of a global audience to determine which pizza is a slice above the other.

The announcement was made at a (frankly, pretty low level) press conference (full disclosure: no press attended) at Manning’s Café in Minneapolis. Again, it was held at Manning’s…

“We felt the location was fitting,” Heggies President Shawn Dockter said. “We appreciate a Manning who loves truly great pizza, and apparently that makes us unique.”

It all started like this: Papa John’s took a swipe at frozen pizza in general several weeks ago when it sauced its Twitter page with this offensive proclamation: “Frozen pizza = the pizza equivalent of a participation trophy.”

Well, that sat in our gut like a soggy made-to-deliver pizza. We’ve been patiently sitting back – like waiting for a hot, just-out-of-the-oven pizza – trying to decide how best to take a bite of the action. Our freezer friends at DiGiorno Pizza did an admirable job defending our collective coldbox characters, but we feel it’s time to move past words and hashtags and bring it home to the pizza.

Taking It To The Pizza

Words are words. We want action. Fortunately, the almost $2 billion global pizza chain is soon bringing its humongous marketing budget to our frozen turf for the big game in Minnesota. We are inviting Papa John’s to join us at the Great Pizza Snowdown (see what we did there?!) on a yet-to-be determined date in a yet-to-be determined Minnesota location. We will bring a pizza oven and our quality, creative, handmade and authentic frozen pizza. You bring your pizza, its cost-you-a lot-of-“dough” advertising slogan and a cardboard pizza box. Oh, yeah, you can also bring that dippy sauce stuff and those pepper thingies if you think it will help. We, on the other hand, don’t need bells nor whistles. Just the best pizza. With a little help from friends, we settle this once and for all.

At the end of the day, Heggies is a kind of five-state (also recently available on the World Wide Web for anyone in the country to enjoy outside of Minnesota, Wisconsin, the Dakotas, and Iowa!) frozen pizza brand with a fantastic fan base that appreciates how Heggies handcrafts pizza. It’s about pizza that brings people together, serves as the foundation for magical memories and always hits a raised bar, usually in bars.

“We are just looking for a handshake in victory, that’s all, and perhaps some better understanding that there is a big pie in which both of us can succeed. Respect would be cool too, but it’s not like I’m looking to be referred to as Papa Shawn or anything,” Dockter said. “I do expect we’d have some sort of participation trophy for Papa John’s though, we apparently have a bunch hanging around. It’s a fitting parting gift.”